SPOTLIGHT ON: Harold Brasington, builder of the Darlington Raceway 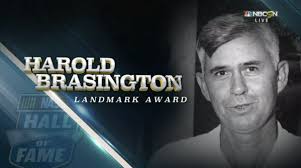 Harold Brasington, a local race promoter, dreamed of building his own racetrack after visiting the Indianapolis 500 in the 1930s

Darlington Raceway, the first super speedway in NASCAR history, was constructed in 1950 by Harold Brasington, a local race promoter who saw asphalt-paved tracks as an advance over the dirt tracks.  Brasington wanted a 500-mile stock car race that rivaled the Indianapolis 500.  On September 4, 1950, the Darlington Raceway hosted the first Southern 500, a 400-lap race in which 75 cars reached top speeds of 80mph.

The story behind how the Darlington Raceway ended up where it is. . .that’s the stuff of legends. According to Jim Hunter’s book 50th Anniversary of Darlington Raceway which was published in 1999 by UMI Publications, on September 4, 1948, Brasington asked Sherman Ramsey about building a racetrack on his property while the two were playing poker. Ramsey, paying more attention to his cards than the request, said, “Sure. Now deal the cards!” Not long after, Ramsey returned from an out-of-state trip to find Brasington on Ramsey’s property, bulldozers and dump trucks in tow.

For Harold Brasington’s innovation and bold vision, he was inducted into the NASCAR Hall of Fame on January 22, 2016.

Logo for the Darlington Raceway