Hearts and Minds: A Brief Study of Darlington Operation Alert 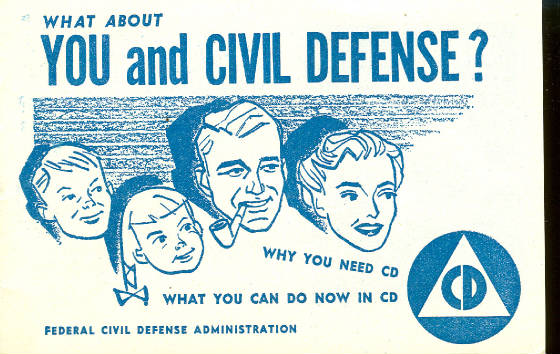 If you could travel back in time to 1988 and ask the nine-year old me what I knew about Communism, I wouldn’t have been able to tell you much.  But I would’ve probably mentioned the word Communism in the same sentence with Bert the Turtle and those duck and cover drills I used to do with my fellow third graders at Old Richmond Elementary School.  And, if pressed, I might’ve claimed that Communism had something to do with Russia, right, and wasn’t that where Mikhail Gorbachev lived?  You know, the guy who spoke gibberish and had a port-wine birthmark on his head?

That I would have known next to nothing about Gorbachev, including how to properly pronounce his name, did not matter because every American—even baseball-obsessed, school-averse third graders—knew that Gorbachev, like all Communists, was bad.  Communists: bad; Americans: good.

Cut to three decades later.  Now, I know considerably more about Communism, all of which I would have learned secondhand by reading books.

But what I can’t tell you about is the fear and loathing of Communism.

And I certainly can’t tell you what it felt like to be afraid—viscerally, palpably, genuinely terrified—of the Soviet Union launching a nuclear attack on the United States.   Because thirty years ago whenever good ole Bert the Turtle instructed me to “duck and cover,” I knelt down under my desk with a smirk on my face and a near-empty head, my only thought being whether Mom had packed a Kit-Kat bar in my lunch that day.

So last week I was rummaging through the filing cabinets in our cavernous records room when I noticed the unlabeled spine of a black three ring binder, the corner of which was poking up like a small rodent checking for a swooping hawk.  Curious, I fished out the binder, no easy feat given the overburdened filing cabinet, and as I brought it closer for inspection, a copy of a Western Union telegram from 1962 fell out:

We appreciate your good work

Keep on investigating and castigating

We want the subversives out

The word subversives made me think of Communism and Russia, which made me think of ducking under my desk in Mrs. Redmond’s class back at Old Richmond Elementary.  But Senator Strum Thurmond?  That name made me think of my father whose voice I heard inside my head reminding me that Thurmond was a segregationist.  Standing in two-thousand square feet of filing cabinets filled with history, I imagined that my old man—a diehard Liberal, a Vietnam Vet, a man I respect and admire—would’ve been so disgusted he might’ve thrown the telegram into the trashcan.

Me, I was just hungry for a story.  The words “investigating” and “castigating” (I had to look that one up) danced through my head, and I, three ring binder in hand, hurried downstairs to my office to learn more about Darlington Operation Alert.

Binder for Darlington Operation Alert, 1961-1962. Found in the archives at the Darlington County Historical Commission

In addition to the Senator Thurmond telegram and some newspaper clippings, one of which stating that Darlington Operation Alert was “a group of local citizens dedicated to promoting good Americanism and fighting Communism,” I found the organization’s minutes, which were incomplete.

After I’d given these documents what could generously be called a cursory glance, I formed a granite-hard opinion on the types of people who would want to spend their free time promoting “good Americanism.” As is my habit, I’d formed an image to accompany the group, too: a dimly-lit backroom, where white men in short sleeves and neckties bandied words like pinko and red and agitator about while smoking Chesterfields and pounding their fists on tables.

But then a voice inside my head said to take a second look at the material in the three ring binder.  “Only this time,” the voice instructed me, “valet park the High Horse.”

And so, yellow highlighter in hand, I read the minutes.

On Thursday, August 31, 1961, the initial meeting was nothing more than a group of “extremely enthusiastic. . .leaders” gathering to discuss the possibility of starting an Operation Alert Program in Darlington.  These leaders, fronted by Marion Anderson of the Cultural and Educational Committee of the Chamber of Commerce, wanted to determine the “purpose” of their club.  Pretty standard. I did, however, take note that Annalee B. Wilcox, the Acting-Secretary, made mention of J. Edgar Hoover’s book on Communism entitled Masters of Deceit.

On September 21, the group declared its “. . .plans for education of Darlington.” Under the heading of “Suggested Projects,” I read the following entries, obviously aimed at children: “Educational material in St. John’s libraries”; “programs at churches on Sunday afternoon.”

On November 30, one of the sub-committees summarized a campaign to write “. . .Letters to magazines protesting subversive material.”  This gave me pause.  Were they messing with freedom of speech, I thought.  Is that what they meant by “good Americanism?”

Gripping my highlighter a little too tightly, I read on.

On December 28, the group announced that “comic books on Communism” were “being purchased” for “our young folks.”

On January 25, 1962, acting on a suggestion by one the members, a telegram was sent to Senator Strom Thurmond proclaiming, “We want the subversives out.”  During the same meeting, Mr. Max Harrison launched a campaign to sale American flags to as many businesses in Darlington as possible.

On February 6, 1962, Operation Alert sent a letter to the Superintendent of Schools asking for permission to distribute an “Information Survey” for parents of children at St. John’s Elementary and Pate Elementary Schools.  Then, on March 24, a report on the results of the “Information Survey” was given: “536 parents wish to see ‘Operation Abolition’. . .Many interesting comments. . .school authorities were most cooperative.” I found a copy of the survey and read it carefully.  There were twelve questions total, most of them asking if one had or had not seen anti-Communist films like Operation Abolition, if one had or had not read Decline of the American Republic.  Question number eleven: Do you own an American flag?

The minutes for the April 26th meeting were incomplete.  The last lines, written in Annalee B. Wilcox’s slanting cursive, read as follows: “The film ‘Operation Abolition’ was shown.  The Reverend Cecil Cave introduced the film.”  The minutes of this meeting took up a quarter of a page, yet I read them repeatedly, while butterflies fluttered in my stomach and questions swarmed my brain. Such as: Is the group in turmoil?

According to our records here at the Commission, the last meeting of Darlington Operation Alert took place on May 24, 1962.  At that meeting, the Board of Directors decided to meet “and decide where to go from here. . .since so few were present.”  A suggestion was made that the group “serve cokes or ice-cream free to attract crowds to our meetings,” and toward the bottom of the page, Mr. Anderson decided to “call an election to replace Mr. Gay who resigned as president.”  I knew that low attendance and replacing presidents were not good signs; the group was dying.

But when I turned the page and discovered that there were no more minutes for the Darlington Operation Alert, my mood darkened, and I couldn’t figure out why.   This group, whose views I disagree with, had apparently dissolved, and yet I was sad.  The only question was, why?  Why did I, a staunch proponent of freedom of speech even for “subversives,” care that this group disappeared some fifty-five years ago? Why?

From the archives of the Darlington County Historical Commission

I wrote that last paragraph four days ago.  For four days, I’ve been reading over the minutes for Darlington Operation Alert, trying to figure out why I cared that the group had disbanded.  Here’s what I came up with: a majority of the group’s efforts were centered on education.  Distributing anti-Communist literature and showing anti-Communist films seemed to be the group’s primary focus.  However, it goes deeper than that.  This group was attempting to safeguard a cherished way of life; this group was trying to protect its citizens from the dreaded Hammer and Sickle; this group was, like the Communists they were fighting, looking to win the hearts and minds of all Americans, especially children.  Being a father myself, I can respect that because I, too, want my son to live in a safe and peaceful world.

Bottom line, for me, the reason why groups like Darlington Operation Alert are worth remembering is not for their failures or successes; they’re worth remembering because they existed, and, whether you agree or disagree with their beliefs, they actually stood for something.  What could be more American than that?