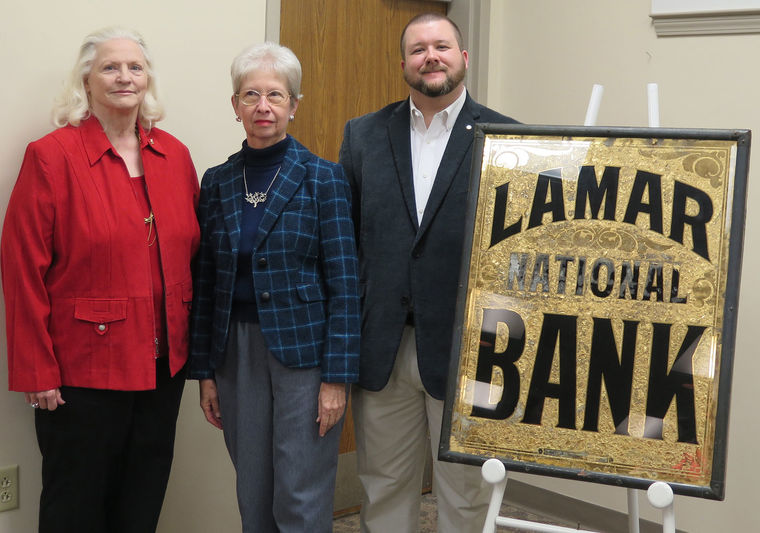 LAMAR, S.C. – Brian Gandy, director/historian with the Darlington County Historical Commission, spoke to a group at the Lamar Library on Monday night about the rich history of Darlington County, including some of special interest to the history of the town of Lamar.

He talked about the Lamar National Bank, Harry Byrd, an American Major League Baseball pitcher; the James Family Bible, now 371 years old and published in 1645; the Rev. Evan Pugh, an American Revolution patriot, Henry Tazewell Thompson, principal of the Darlington Military Academy. During the Darlington Riot in 1894, he was a captain of the Darlington Company. He also served in the Spanish American War.

One of the highlights of his talk was the presentation of the restored Lamar National Bank sign. He unveiled the piece of restored Lamar history for the first time to the group.

Lamar National Bank was chartered on Oct. 25, 1912, with a capital stock of $20,000, he said. The bank failed and closed its doors on Nov. 8, 1928. The sign will now hang outside the conservation room at the Historical Commission in Darlington.

Lamar is the youngest town in Darlington County and one of the earliest settlers was Amos Windham who was issued more than 5,000 acres in two land grants in 1790s, he said.

Lamar is named for Lucius Quintus Cincennatus Lamar, he said.

Gandy said the Historical Commission’s role is to preserve, protect and promote the history of Darlington County.

Their collection includes vast information on family surnames that in some cases date back to the founding Welsh settlers along the banks of the Great Pee Dee River. This material is supported with a very large collection of biographical files containing family records such as journals, diaries, personal correspondence, photos and other personal material.

“We are the official repository for county records and maintain the earliest court and land records of Darlington County,” Gandy said.