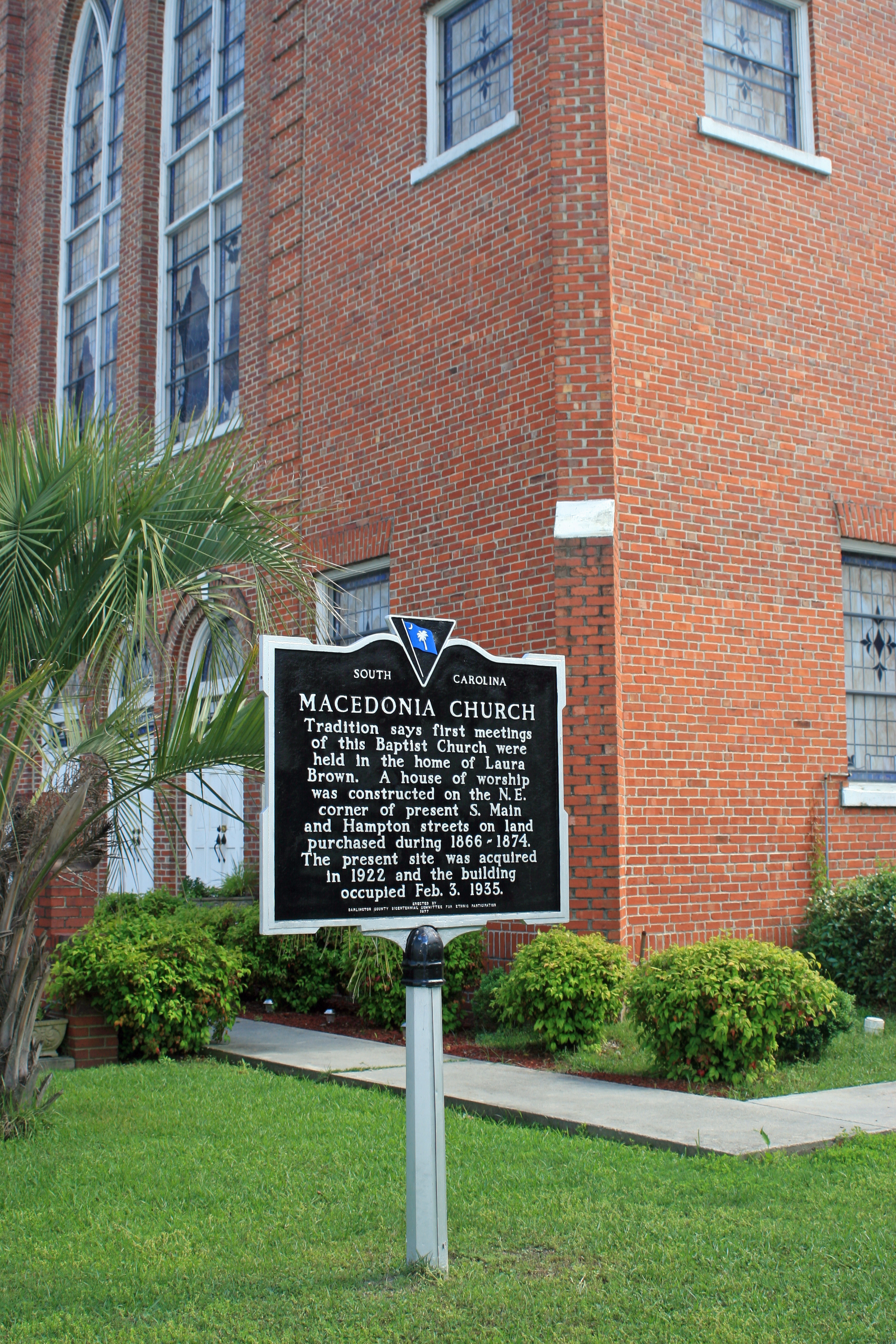 Today in Darlington County History – Macedonia Baptist Church was created when 13 members of First Baptist Church, Darlington petitioned for rights to withdraw their membership to form a new congregation on February 11, 1866.

The fervent little congregation met under brush arbors and in homes before building any permanent structure on the corner of Hampton and Russell (now South Main).  Dr. Brockenton was successful in building two houses of God before his death in 1908. Dr. Brockenton stated that when he told his congregation that it was time to build a church, he placed one lone quarter on the offering table. That quarter, he said was laughed to scorn, however, one year later the congregation was walking into a new house of worship, despite the laughter. The first permanent structure was located at Hampton and Russell Streets  in Darlington. Macedonia used this structure until 1935.

1908 -1916 Rev. P. A. Callaham assumed the pastorate of Macedonia. The church grew numerically and spiritually under his leadership.

1916-1920 Dr. James E. Kirkland became the third pastor of Macedonia. He was a man of great vision, who planted the seed that inspired the congregation to build the present church structure. Under his leadership, after members began to solicit funds and make many personal sacrifices, they were able to buy the land at Lee and South Main Street for $2,500. Rev. Kirkland resigned in 1920 when he accepted the pastorate of the White Rock Baptist Church in Durham, NC.

1920-1925 Dr. Kirkland was succeeded by Dr. C. D. Hubert. Dr. Hubert’s pastorate is best remembered for his keen interest in the youth of the church and his unfaltering effort to begin the erection of the present edifice. Crop failure and unemployment prevented him from seeing the church completed during his pastorate which ended in 1925, when he resigned to assume the presidency of Morehouse College in Atlanta.

1927-1945 Dr. H. W. Long was called to Macedonia in 1927 and enjoyed a long successful pastorate. It was through Dr. Long’s leadership that the congregation was able to secure adequate funds to resume construction on the present edifice. After 13 years of building, and even though the structure was not complete, the members were happy to be able to walk into their new home and they did so on a very cold February morning in 1935. In 1945, Dr. Long assumed the leadership of Salem Baptist Church in the city of Darlington.

1945-1990 Continuing the great tradition established by his predecessors, Rev. C. L. Bowens became the sixth pastor of Macedonia and was a catalyst for great positive change in Macedonia. Many physical improvements were made. The edifice was completed and decorated, a central heating unit was installed, church school, nursery, dining area, musical instruments, and rest room facilities were provided. Rev. Bowens and his lovely wife were two great educators who were well loved and greatly respected by the Darlington community. They gave of themselves tirelessly and are greatly missed.

1990-2008 Rev. Donald Hughes brought to Macedonia an emphasis on education. As a former math teacher and football coach, he was especially interested in the intellectual development of the church. He and his lovely wife, Mrs. Hattie Hughes, worked with the Sunday School Department of the Pee Dee Baptist Association and the State & National Congresses of Christian Education. Under Rev. Hughes pastorate, the Life Skills 501c3 was established to enable Macedonia to qualify for various grants to help better serve the youth and disadvantaged in our church and community. Many physical improvements and repairs were made as well. Rev. & Mrs. Hughes are still actively involved in the Pee Dee Baptist Family and they reside in Hartsville.

2009-present Rev. Cecil L. Bromell, M.Div. became the eighth pastor of our church on the second Sunday in February 2009 and was installed in April of the same year. Pastor Bromell, a graduate of Morris College and the Morehouse School of Religion, is a full time pastor who commits himself to serving the needs of our congregation and even finds time to assist persons not affiliated with our church.

Page 15 of Macedonia’s Church Records dated August 2, 1874 – referencing the acquiring of land for the purpose of building a new Church.

Page 16 of Macedonia’s Church Records dated August 2, 1874 – referencing the acquiring of land for the purpose of building a new Church.