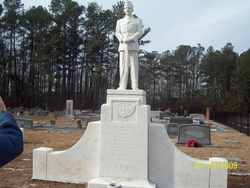 The statue is perfection personified. It is a perfect likeness according to his parents whose words are borne out by comparison with photographs.

The air of the once fair slope of France was tense and charged as the patrol moved forward, the scouts out on the flank. War gripped the land and the Allied armies, for the second time in the same century, were pushing slowly and painfully toward Germany and the lair of Adolph Hitler.

A big attack was imminent but first came the little, probing attacks that were so vital in sounding out the enemies’ strength, the little maneuvers that bought information at a high price.  So the small group of men moved ahead, eyes of those behind ever watchful for the signals of the scouts who slithered through the tenseness beyond them. The forwardmost scout approached a low wall cautiously, his every sense alert. He looked; he listened, gave the signal to those behind him and went over the wall.

Suddenly, he tossed up a hand end dived for a hole in the terrain as a shot rang out. Private First Class Duncan Owen Lee of Timmonsville, South Carolina, United States of America, had heeded his Maker’s call and offered the supreme sacrifice. The remainder of the patrol found him in that ditch near Forbaeh, France, A sniper’s bullet had pierced his steel helmet.  Death had come quick and sharp to a youth of 19 whom, less than a year before had served patrons of the Guaranty Bank and Trust Company in Florence and who had roamed his father’s farmlands in his spare time.

Duncan M. and Grace Phillips Lee found it hard to believe that the son they had seen graduate the youngest in his class at Timmonsville High School was dead.  When he entered the Army in May, they had no idea he was embarking on the “Long Journey,” through they knew his risks would be great.

So they decided to do something to perpetuate his memory, something that would continue to remind them of him as he once was. The results of their planning plus the cooperation of understanding businessmen stands today in the cemetery of Salem Church, between Timmonsville and Lamar— a life-size statue and perfect like­ness of Pvt. Lee. Posed at military ease, the figure stands atop the monument that marks his, final resting place.

Eight years from the time that Duncan was reported KIA, the marker was erected.  From the time they received the terse announcement of his death from the War Department, his parents started their planning. Dun­can was first buried at Epinal, France. The monument in the graveyard at Salem Church was erected in 1947. His body came to join his monument in 1948.

The actual grave marker, in it­self an elaborate affair of white marble, was prepared by the Flor­ence Memorial Company. Owners of that firm paved the way for the statue of Duncan Lee that was to be carved later and at whose unveiling, Gov. Strom Thur­mond spoke eloquently.

The statue is perfection personi­fied. It is a perfect likeness ac­cording to his parents whose words are borne out by compari­son with photographs. The shoul­der patch of the 70th Division of the Seventh Army stands out bold­ly in relief,  an identification brace­let, ring and wrist watch that he wore constantly are plainly in evidence. A campaign ribbon and sharpshooter’s badge are en­graved over the left breast and the insignia of the U. S. Army stands out from the lapels of the uniform, jacket.

Work on the statue was begun in September, 1945, and completed in April 1947. Gerald Horrigan of Boston made the first clay cast while A. Piccini did the stone cut­ting for the Vermont Marble Company. The senior Lees made a trip to Vermont to approve the statue before the final touches.